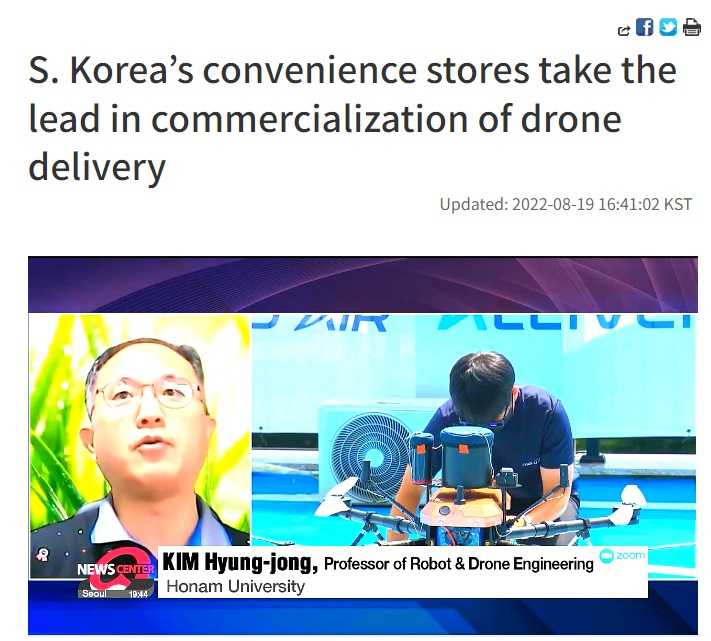 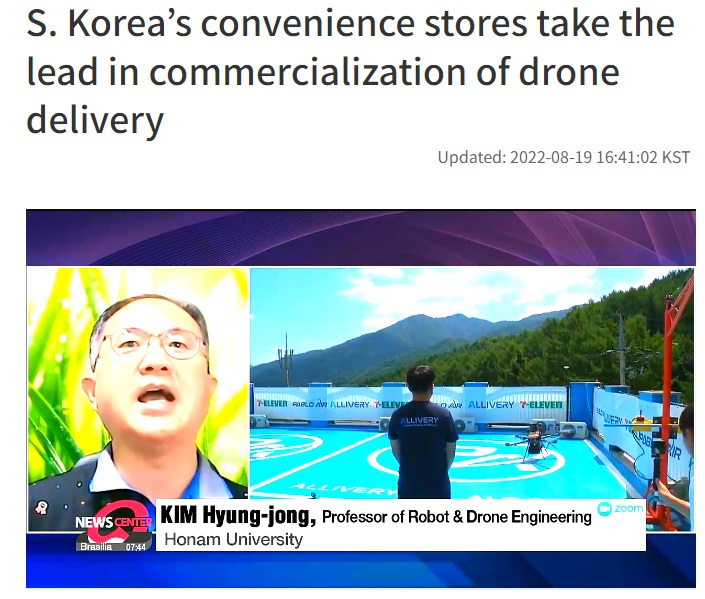 South Korea has been looking at ways to commercialize the use of drones.
Some of the ways that been looked at include convenience stores, which have launched a drone delivery service in mountainous regions of the country. areas which can be hard to access otherwise.
There are plans to expand the service to urban areas as well.
Shin Ha-young reports.

Here in this convenience store, a basket of items is on the way to the drone station for delivery.
7-Eleven is one of the convenience store chains leading the commercialization of drones in South Korea with their drone delivery service.


"This is an autonomous drone with its destination preset to this pension. When using this drone delivery service, it takes only about 3 minutes to get what you've ordered from the convenience store which is about a kilometer from here."

Behind the prompt delivery, is a control tower, where the whole process is carefully monitored, from flight paths to emergency situations.
The service comes as delivery to mountainous areas often proves to be difficult or troublesome.


"It's difficult for people in mountainous areas or isolated regions to use online delivery services. That's why we planned to provide drone delivery for those customers."

And as the company expected, the customers were satisfied with the service.

"People order as many as 10 items during weekends. It's helpful, especially for those who can't drive after drinking. I've ordered ice cream and it didn't melt as it took only a few minutes to be delivered."

Other convenience store chains are also either making preparations or have already kicked off their own drone delivery service.
As a result, drones flying around South Korea could become a familiar sight in just a few years.
According to the Ministry of Land, Infrastructure and Transport, the country's drone market has been growing rapidly and is expected to hit 800 billion Korean won or just over 600 million U.S. dollars by 2024.
Meanwhile, retail giants in the U.S. like Walmart and Amazon have already put drones to work.
Then what about South Korea's drone industry? Is it ready to be commercialized?
One executive from a drone company points out that regulations need to be improved first.

"Drone companies have been in discussion with the government about the direction of policy-making such as allowing the drone companies to expand the drone delivery business to cities. However, in terms of speed, there is a gap between the nation's legislation and the technology's development."

In the meantime, the government announced that it will provide guidelines for drone delivery during the second half of this year.
A bill regarding flying taxis will be submitted by the end of August with that service aiming to start by 2025.
The country is also enhancing its technological competitiveness by promoting joint R&D between multiple ministries.
One expert says the drone industry is expected to develop further if the government deals with institutional factors.

"In urban areas there are safety issues and not enough tests are conducted regarding the radio wave environment, which is easily interfered with. If the government addresses these issues, the drone industry can develop further."

He added that the cost of drones is another factor that needs to be addressed as the price may be outside the reach of small businesses that wish to use them.
Shin Ha-young, Arirang News.